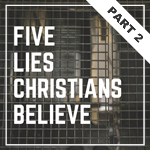 A few years ago, I had a co-worker who was Buddhist. Even though we had radically different religious views we developed a great friendship. One thing my Buddhist friend loved was Scotch. He was well educated on what brands were best, even had a story of how he learned how to drink Scotch.

How many Christians are trying to be good Christians?

Trying to be a good Christian is a lie.

Now you can do a lot of religious things by trying your best to be a good Christian. You can attend church, help others, try to keep your sin in check and confessed, but in the end,  you will always fail.

Several things happen when you try your best to be a good Christian.

So many Christians come to Christ in faith,
then try to live the Christian life by their works.

You live the Christian life the same way you came to Christ; by faith.

Jesus lived in complete dependence on God the Father.

Jesus said he didn’t do anything on His on. Everything Jesus did was in response to what He saw the Father was doing. He lived in complete dependence on the Father.

Therefore Jesus answered and was saying to them, “Truly, truly, I say to you, the Son can do nothing of Himself, unless it issomething He sees the Father doing; for whatever the Father does, these things the Son also does in like manner. – John 5:19

Jesus said we weren’t able to live the Christian life. Just as Jesus didn’t do anything He didn’t see the Father doing, He says that we can’t do anything on our own.

“I am the vine, you are the branches; he who abides in Me and I in him, he bears much fruit, for apart from Me you can do nothing. – John 15:5

The only way we can live the Christian life is to allow Christ to live through us. We must walk in complete submission to Him and allow the Holy Spirit to empower us and live through us.

As we walk in fellowship with Him, He empowers us to live the abundant life He promised.

We have a choice, we can live the Christian life in defeat and frustration, we can live by a set of rules that define holiness (one that we create), or we can live empowered by Christ and the Holy Spirit. One is by our strength, the other is His strength. One will burn you out and leave you defeated, the other will bring a peace and rest you have never experienced before. That is what being filled with the Spirit is all about, allowing Christ to live life through us. We surrender to Him and He empowers us for life.

So how do you live? Are you trying your best to be a good Christian, or are you allowing Christ to live through you? Are you living in the frustration of trying to please God, or living in the peace and power that comes from releasing your life completely to Christ?

If you are trying hard to be a good Christian, give up and allow Christ to fully live through you.

Have you ever believed this lie? Let me know your thoughts in the comments below.

714PRAYER – God Moves in Response to Our Prayer

714PRAYER – Repentance, the Pathway to Awakening